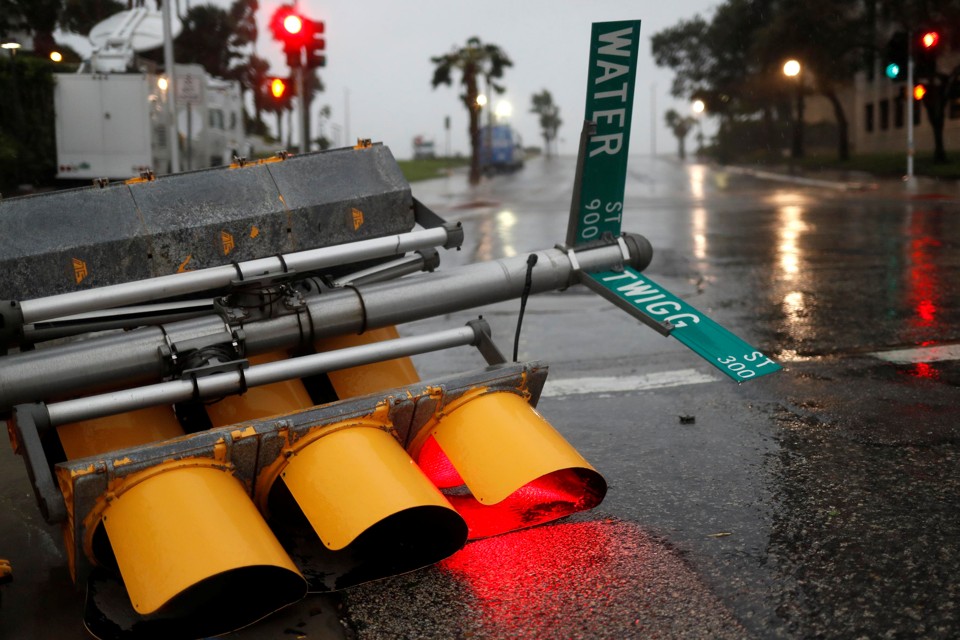 How Hurricane Harvey Could Cause Long-Term Devastation

The record floods predicted as the storm stalls on the Texas coast might wreck the federal flood-insurance program, and cause financial ruin for insured and uninsured homeowners alike.

Beyond the Category-4, 130-mph winds, the devastating eye wall, and the storm surge hundreds of miles wide, the most destructive part of Hurricane Harvey as it bears down on the Texan Gulf Coast might be the rain.

The storm is projected to basically sit over the region as it runs its course, in the process pouring biblical amounts of rain—30 inches or more—on Texan coastal areas from Corpus Christi to Houston. Even outside the area of truly catastrophic rainfall predictions—which were so high that some weather maps had to add brand new colors to their legends—places like the lower half of Louisiana seem likely to receive a foot or more of rain.

The most likely outcome, unless the storm takes an unexpected turn, appears to be tragedy. The region is already inundated. Houston’s already seen abnormally high amounts of rain this August, and parts of Louisiana are still flooded after rain storms earlier this month, a situation that left parts of New Orleans under several feet of water after some of the city’s water pumps failed. For now, the best case scenario is to hope that most people have evacuated, and that the storm and flood’s ravages will come against property and not human lives. After all, houses can be rebuilt.But this time, even that may not be true. Although Texas and Louisiana—owing to the constant threat of floods—are among some of the places in the United States where flood insurance is most prevalent, there are few places where even a quarter of all homes are covered. In Houston, just over 119,000 places are covered by flood insurance policies backed by the National Flood Insurance Program, which helps fund most flood insurance policies. There are just over 800,000 occupied housing units in the city, which means that somewhere under a sixth of all homes in the city have flood insurance. The situation is the same in Corpus Christi, where 19,183 buildings are insured of around 115,000 occupied housing units.
The dearth of flood insurance policies makes the result obvious: Most people who lose homes or have them damaged in Harvey won’t have money to replace or repair them. There are a number of reasons why people might go without insurance. Flood protection is expensive, especially in at-risk areas—indeed, that’s how a flood insurance system should work. And although people in especially high-risk flood areas have to purchase flood insurance when they purchase homes as per NFIP guidelines, for people outside of those extreme-risk areas, lack of recent flooding can persuade many homeowners and renters from taking on the additional expense.For a place like Houston, where the number of extreme-risk areas has skyrocketed over the past few years as floods have become much more common, many people without insurance may simply not know that their homes have a 25 percent chance or more of facing flood damage in a year.

But even for homeowners who do have flood insurance, the prospect of receiving full support for their future claims seems dicey. To say the NFIP has been beleaguered would be a euphemism—the program has been in debt since its inception 50 years ago, and now sits at least $24 billion in the hole. The premiums many homeowners pay are not enough to cover expenditures, the program has just started utilizing reinsurance for catastrophic costs, and the structure of the program is such that there’s never a disincentive to building homes in flood-prone areas, which means that 30 percent or so of the NFIP’s hemorrhaging of money goes to a handful of houses on floodplains that just get rebuilt every year.

No amount of reform will save the lives or homes of people living in the path of the storm now.

Additionally, after Hurricanes Katrina and Sandy, the program has been dogged by allegations that it has repeatedly shortchanged homeowners and that the private insurers that administer policies backed by NFIP have been negligent in their business practices. Essentially, the program has appeared to be one Sandy-level event away from total disarray. And after constant already-catastrophic flooding around Louisiana and eastern Texas, Hurricane Harvey seems to be much more than a Sandy.

In an email to me on Friday evening, Roy Wright, NFIP administrator and acting FEMA associate administrator for insurance and mitigation, noted that floods are the most common form of disaster. “Flood insurance—whether purchased from the National Flood Insurance Program (NFIP) or through private carriers—enables insured survivors to recover more quickly and more fully after flood events,” Wright said. “It is one way Americans can financially protect themselves from losses caused by floods.”But this protection might not be possible if the critical instability of NFIP continues. That’s the main reason why politicians have tried—and failed—multiple times to reform the program, and perhaps to create a disincentive for constant rebuilding, and a way to increase premiums on the riskiest bets. But, as environmental justice scholar Robert Bullard noted in his book Race, Place, and Environmental Justice After Hurricane Katrina, especially in the Gulf region, the people who are already lapsing on NFIP policies or have avoided them by technicality or grandfather clauses tend to be lower-income and often people of color.

Indeed, historically the most vulnerable populations of people have tended to inhabit land on the riskiest plots flood-wise, which means that efforts to make NFIP more fiscally responsible could also have the effect of stripping marginalized people from the only available tracts of land they can afford.

The conundrum of federal flood insurance has been such that it’s allowed some bipartisan movement in a Congress that is currently polarized to the point of rigidity. NFIP expires in September, and Senators Kirsten Gillibrand, a Democrat from New York, Louisiana Republican Bill Cassidy, and West Virginia Republican Shelley Moore Capito have introduced a reauthorization bill that might keep the program from collapsing. The reauthorization would decrease barriers to privatization of flood insurance, would allow NFIP administrators to identify the most expensive beneficiaries, and would strengthen flood mitigation and flood-plain reporting.But even that reauthorization appears not to be able to grasp the fundamental instability of flood insurance—right now, as a concept, flood insurance is simply not a profitable venture, and as climate change alters weather patterns, there are more and more catastrophic flood events.

Catastrophic flood events like the next few days of Hurricane Harvey, which will create problems that none of the ongoing flood-insurance reforms can fix. No amount of reform will save the lives or homes of people living in the path of the storm now. Many people—perhaps even those with insurance—will be left without recourse when the storm is over. But the thousands of people who will likely lose homes in Hurricane Harvey are reminders of the dire problems caused by flooding, and of the need to create a new, workable program that might be able to cope with the next Katrinas and Sandys and Harveys. Because the evidence indicates there will be many more to come.