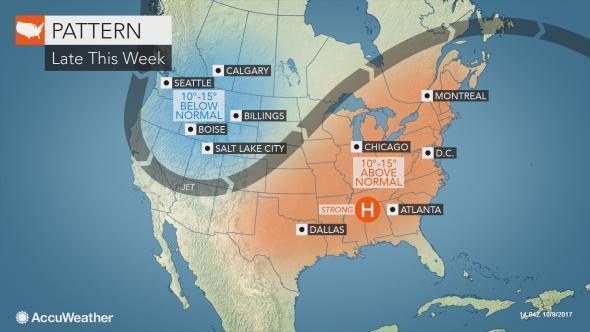 After getting a brief taste of cool autumn temperatures during the first few days of October, New Jersey has been stuck in a warming trend that has made it feel more like late summer the past few days.

Thanks to warm air flowing in from the southwest, much of the state was 10 to 15 degrees warmer than normal from last Thursday through Monday. And the trend will continue for one more day, with temperatures expected to climb into the low 80s on Tuesday.

With sunshine returning and humidity dropping, “it should be a beautiful day,” said Valerie Meola, a meteorologist at the National Weather Service office in Mount Holly.

Although daily record highs for Oct. 10 likely won’t be broken, the mercury could come within a few degrees of the records in Atlantic City and Trenton, according to the National Weather Service. Even if records are not matched, the afternoon highs on Tuesday will be running 14 to 17 degrees above normal for early October across most of New Jersey, as well as in New York City and eastern Pennsylvania.

Forecasters say temperatures will revert back to near-normal, autumn-like numbers on Wednesday, Thursday and Friday before creeping up again — into the mid- to upper 70s — on Saturday and Sunday.

Meanwhile, New Jersey received some much-needed rain the past two days, because of a frontal system from the west and leftover moisture from Tropical Storm Nate from the south.

Although South Jersey had a fairly wet September, many parts of central and northern New Jersey received less than 2 inches of rain throughout the entire month — 2 inches below normal — and less than a quarter-inch of rain during the first eight days of October.

Most of New Jersey picked up less than a tenth of an inch of rain on Sunday, while a few climate sites recorded from two-tenths to a half-inch, according to data from the New Jersey Weather & Climate Network, based at Rutgers University.

On Monday, the remnants of Tropical Storm Nate brought about 1.3 inches of rain to High Point and 1.2 inches to Wantage in Sussex County, and just over 1 inch of rain to Walpack in Sussex County and Upper Deerfield in Cumberland County.